Adin writes urgent, personal poems about urban life in a coastal city inundated by sea level rise and subsidence, contending with alternating floods and droughts, and about the resilience of people living in kampungs (informally organized low-income neighborhoods in vulnerable areas). For Adin, poetry, culture and the arts are participatory projects that build social cohesion and increase political leverage. Adin will read his poems in Indonesian accompanied by English translations in the context of a conversation with Simon Richter about poetry, community, and the climate emergency as seen from a kampung in Semarang on the Northern coast of Java. This event is Kelly Writers House’s contribution to Penn Climate Week. 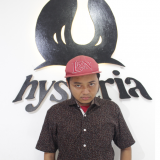 Ahmad Khairudin (Adin), Director, Kolektif Hysteria; Lecturer, Faculty of Anthropology, Universitas Diponegoro; and poet. Adin has an MA in Anthropology from the Universitas Indonesia. He has been the director of Hysteria since 2007. Hysteria is the primary platform and network for socially engaged art in the city of Semarang. Their multi-year collaborative interventions with vulnerable low-income kampungs throughout the city are legendary. Hysteria uses art and culture to help kampungs express and represent their distinct identity. This often results in greater visibility and leverage for the kampung, bringing political and economic benefits, in addition to greater social cohesion. Despite Hysteria’s urban edginess, they gain the trust of even pious kampungs. Increasingly their work in the kampungs is linked to resilience and adaptation, for example in the subsiding Kampung Kemijen, which deals with tidal flooding and flash floods, and Kampung Nongkosawit, in the uplands, where drought and landslides alternate as threats. Hysteria deploys mural painting, music, cultural history, theater, crafts, story-telling and poetry, local experts, public discussions, video, mapping, design and other elements, always location-dependent and in collaboration with the community. The real art work is the process itself, which is also duly curated and archived. Hysteria played an important role in mediating between city government and communities during the development of the Semarang Resilience Strategy in the 100RC Program. Adin has received training and global recognition as a curator in Germany and Japan, and was invited to Berlin in 2019 as part of the Global Solutions Initiative. In June 2019, he and two other members of Hysteria were artists in residence in Heidelberg, Germany. Adin is in demand as an inspiring keynote speaker throughout Indonesia and Southeast Asia. In 2019, he published Lobang Pertama, a selection of his poetry. 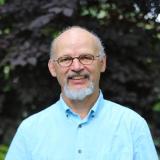 Department of Germanic Languages and Literature University of Pennsylvania

Simon is the Class of 1942 Endowed Term Professor of German and chair of the Climate Week at Penn planning team. Simon's teaching and research focus on cultural aspects of resilience, climate adaptation and sustainability, especially with regard to water and forests, and take the climate emergency as their starting point. Recently, Simon has been a member of international design teams working on climate adaptation projects in Semarang, Indonesia, and Amsterdam.