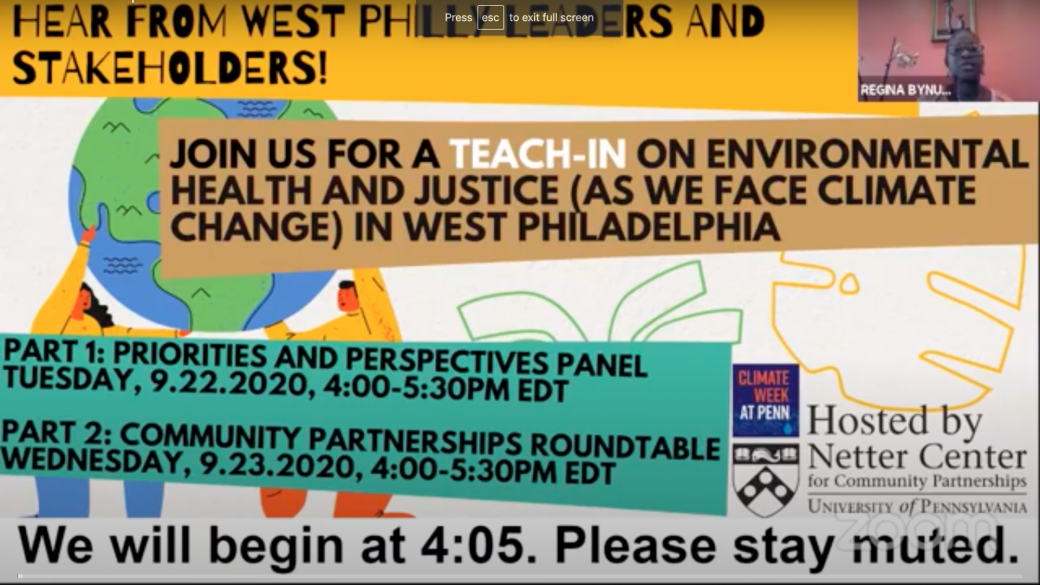 The Netter Center is organizing two Teach-Ins on West Philadelphia environmental and climate health, social justice, and the intersection of these issues. In these teach-ins, community leaders will share their perspectives on current challenges, priorities and hopes for the future.  Panelists will discuss opportunities for Penn partnerships and practical ways to engage in democratic, collaborative problem-solving that advances community health and resiliency in the face of climate change.

In “West Philadelphia Teach-In Part 1: Community Perspectives and Priorities on Environmental Health and Justice in West Philadelphia,” panelists will respond to audience questions after briefly discussing the following questions: 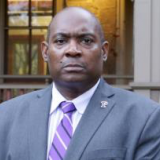 Darin Toliver, MSW, has over 20 years professional experience in social work, in the areas of childhood development, mental health, and education. Darin holds a B.A in Political Science from Temple University and a MSW from the University of Pennsylvania’s School of Social Work (’02). Darin serves as the chairperson for the Men of Color and is a co-chair of the Dr. Martin Luther King Jr. Symposium.  As a lifelong community advocate, Darin is an acting Commissioner on the Mayor’s Commission of African American Males (MCAAM), a position appointed by former Mayor Michael Nutter and current Mayor James Kenny. Darin is currently a PhD candidate, working on his PhD in Social Work Education at Widener University, with a particular interest in evidenced-based research and strategies that will decrease gun violence. Currently a member of the National Association of Social Workers, he was selected by the social impact organization Generocity as one of 12 people of color strengthening the social impact sector in Philadelphia. 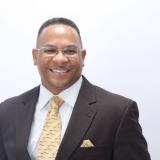 Pastor Nock serves as Vice-Chair of the Netter Center’s Community Advisory Board at the University of Pennsylvania. He also sits on the Community Advisory Board of the Please Touch Museum and is the President of the 16 th District Police Chaplains. He also served on the Board of Trustees for Phil-Mont Christian Academy from 2009 to 2019 and is the President of the School Advisory Council for Motivation High School. Pastor Nock has over 25 years of experience in ministry as a preacher, teacher, counselor, conference speaker and mentor. On September 8, 2001, Pastor Nock accepted the call to become the Senior Pastor of Second Antioch Baptist Church in West Philadelphia. An area in which he grew up and now serves as the undershepherd of a Spirit led and Word-based ministry. 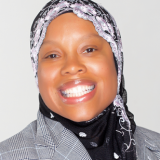 at the University of Pennsylvania's Netter Center for Community Partnerships

Katera Moore is the Director of the Agatston Urban Nutrition Initiative at the University of Pennsylvania's Netter Center for Community Partnerships and an Associate Fellow with the Center for Public Health Initiatives. She is an urban geographer who thinks critically about the political and economic structures that create inequality, and considers food justice and health disparities to be an outcome of residential segregation. She is passionate about place-based education and is an experienced K-16 educator. Katera received both her BA in Urban Studies and her Masters of Environmental Studies from The University of Pennsylvania. Using a National Science Foundation fellowship, she earned her Ph.D. in Earth & Environmental Science and certificate in Africana Studies at The Graduate Center in New York. She also has a certificate in Institutional Research & Assessment for Higher Education Decision Making. 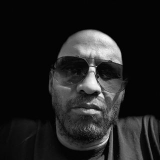 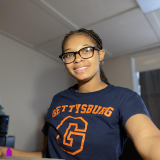 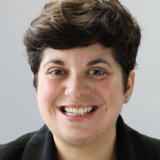